Today, the Clan’s membership exceeds 350 members. Clan Lindsay participates in over 60 Scottish games and festivals and we have area representatives for more than 15 states. Over 10,000 genealogy entries have been entered into our database. On August 19, 1956 at MacRae Meadows in Linville, North Carolina, the first Grandfather Games were held. This one-day event attracted approximately 10,000 people. Among the attendees were:

This group approached the home office of the Clan Lindsay Society in Scotland to establish a branch in the United States, but did not receive permission. Undaunted, Lindsay Saunders agreed to sponsor the Clan Lindsay Society at the Grandfather Games and William Lindsay became the Registrar of the Games. Lindsay Saunders, William Lindsay and Saxon Crawford were also patrons of the games.

For a number of years, Mr. and Mrs. William Lindsay continued to serve as Registrars of the Grandfather Mountain Highland Games and also represented the Clan Lindsay Society of Scotland. 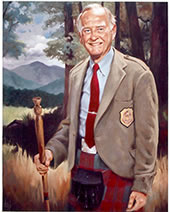 Clan Lindsay Association USA, Inc. was officially established in February of 1974. For the Lindsay NC the Clan began to establish the rules and traditions that we see in our Clan of today.

On December 13, 1975 the 28th Earl of Crawford and Balcarres died in Scotland. He was succeeded by his son, Robert Alexander Lindsay, who in 1989 became our Clan chief.

In the fall of 1976 Wm. S. Lindsay SC accepted the honorary position of chief of clan Lindsay Association USA, Inc. Mr. Lindsay was made available to the officers and trustees of the clan as he shared his experience with them. In this capacity he served as coordinator with other Scottish organizations.

In 1979 President Frank Lindsay announced that the clan membership had increased 200% to 80 members.

At the 10 year birthday of Clan Lindsay in 1983 President Lindsay Kerr Bishop TN announced in the state of the clan address that the Clan had 147 members and the finances were the best to date.

The 1980’s was probably the most important decade for our Clan. In 1987 a discussion began at Clan Council Meetings to accept as chief of Clan Lindsay USA Robert Alexander Lindsay, the 29th Earl of Crawford & 12th Earl of Balcarres and also the Hereditary Chief of Clan Lindsay.

Dr. James B. Pressly had heretofore been designated as Clan Chief by election through the Clan. After a discussion with Lord Crawford, who stated there could be only one Clan Chief, Dr. Pressly’s title was changed to Clan Chairman through the By-Laws. Lord Crawford was listed as Clan Chief in the Summer 1989 issue of the Clan Lindsay USA Recorder. He addressed the entire Clan at the Grandfather Mountain Highland Games in July 1989, where he was the Honored Guest of the Games. A Genealogical database (pre-computer) was established.

The surname ‘Affleck’ was added to our septs. The Affleck’s are the traditional hereditary Armor Bearers for the Earls of Crawford.

A ‘friendly feud’ begins with Clan Donnachaidh. The Donnachaidhs stole 700 head of cattle from the Lindsay in the 1300’s. Modern Day Lindsay’s have demanded reparations.

Clan Lindsay USA entered into the modern electronic age by establishing its first website in the mid 90’s.

In August 1998 Clan Lindsay USA congratulates the Earl of Crawford on the 600th year of the Earldom of Crawford.