This map of Scotland shows castles and other locations that have an association with the Lindsays and their septs. 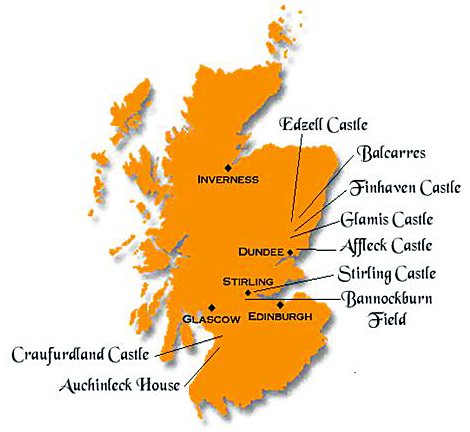 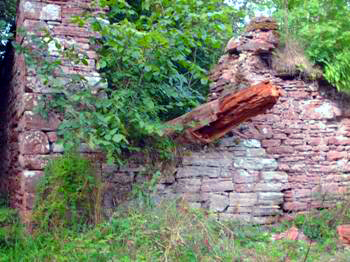 The lands were originally owned by a family who took its name from the lands, “de Auchinleck.” In 1504, the Auchinleck family forfeited the land and King James IV gave the land to Thomas Boswell from Baluto, Fife. The original structure is now in ruins, replaced by four houses built in the 1700’s.

Located nine miles northeast of Dundee, just to the west of the town of Monikie, in Angus, its original builders are not very well known. Affleck Castle was built around 1460, probably by the Auchinleks, who were the hereditary armor-bearers to the powerful Clan Lindsay, Earls of Crawford. The name Auchinleck, pronounced Affleck, is Gaelic and means “Field of Stones”.

Auchinleck (pronounced Affleck) House is located in Ayrshire, about eleven miles east of Ayr and three miles south of Mauchline. It is in a restored condition.

Auchinleck House, or “The Place of Auchinleck” as it was once known, was built by Lord Auchinleck, James Boswell, Esq. The Scottish classical-style mansion was designed by Robert Adams, one of Scotland’s most famous architects. The exact year the house was built is not known, but since Lord Auchinleck died in 1782, the estimated year it was built is around 1780. Auchinleck House remained in the Boswell family until it passed through the female lines to the Malahide family. 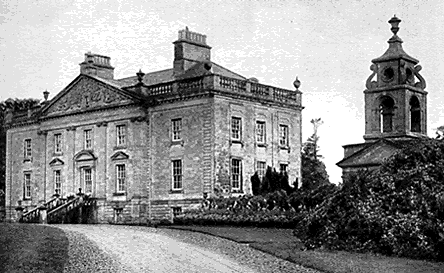 The house is located between the glen of the Lugar and Dippel Rivers.
The Photo is from Famous Scottish Houses by Thomas Hannan, 1928.

The House is now owned and operated by The Landmark Trust, which restores properties of historic and architectural importance and then lets them out for holiday stays.

The following web site tells a humorous story about a certain Dr. Johnson invited by James Boswell to visit his father, Thomas Boswell, at Auchinleck House in an effort to impress his father. More information on Dr. Johnson may be found here. 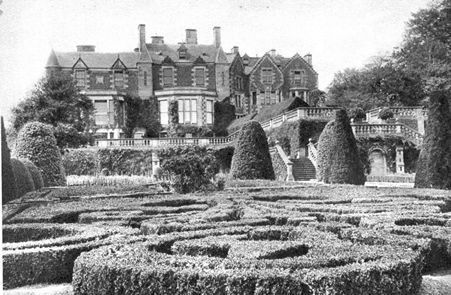 The home of the current Earl of Crawford.

Photo from Famous Scottish Houses by Thomas Hannan, 1928 Balcarres is the private residence of Rt. Hon. Robert Alexander Lindsay, the 29th Earl of Crawford. The entrance to Balcarres was through “The Golden Gate,” which is a highly ornamental piece of ironwork. This entrance is now permanently closed. 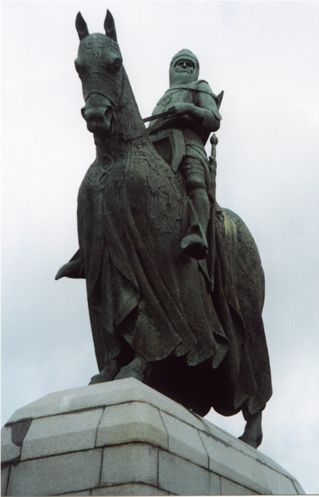 Robert the Bruce
Image from Juggle.com 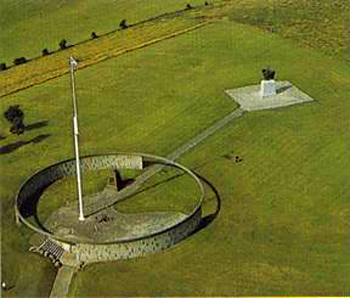 Bannockburn Battlefield is located in the center of Bannockburn,
just a few miles south of Stirling.

On June 24, 1314, King Robert the Bruce led 5,500 trained men to victory over the English army of nearly 20,000. Bannockburn was the greatest victory ever won by the Scots. Robert the Bruce proved himself not only a superb leader, but also a skilled general. Lindsays and Crawfords were involved in that epic struggle.

This victory helped pave the way for the Declaration of Arbroath and then the Treaty of Northampton, which led to Scottish independence from England.

In the 1930’s, the Bannockburn Battlefield was in danger of being developed. Fortunately, the head of the Bruce family, the 19th Earl of Elgin and Kincardine, KT, raised funds and purchased 58 acres of the former battlefield. The area purchased includes the site of the Borestone where Robert the Bruce located his headquarters before destroying the English army. In 1932, the Earl granted this land to The National Trust for Scotland.

In 1967, the new auditorium and information center opened. Today, an excellent audio-visual presentation of the Bannockburn Battle is presented. 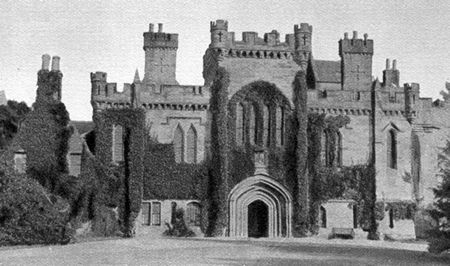 This castle was built in the 1200’s and is the ancestral home of the Houison Crawfords.

As the ancestral home of the Lindsays, Edzell Castle was the original castle of the Chief of Clan Lindsay which they acquired in 1358 and retained ownership until 1715. 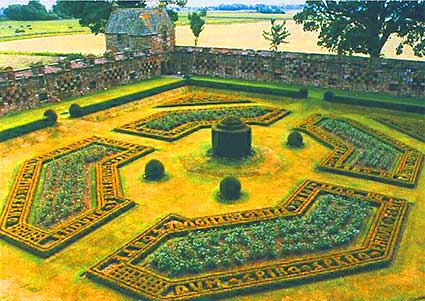 The formal gardens at Edzell are among the finest in Scotland. The gardens date back to 1604. The hedge is cut to form the motto of the Glenesk Lindsays: Dum Spiro, Spero.

At the far end of the garden, the summer house offers a pristine view of the gardens, even when the weather is not suitable for strolling around the grounds. 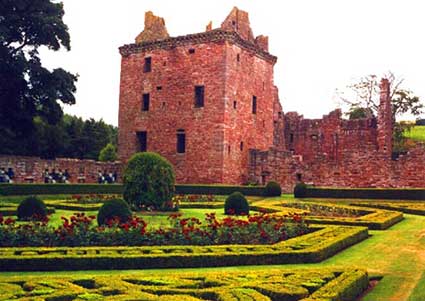 This photo was taken by Anne Burgess and used with permission.

The oldest part of the house is the tower, which dates back to the early 1500’s. 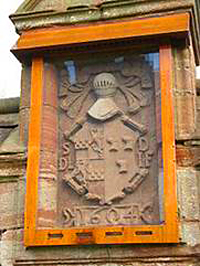 Arms of Sir David Lindsay and his wife, Dame Isabel Forbes, over the garden gate 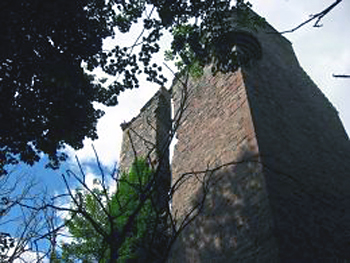 This castle, now in ruins, was the ancestral home of the Crawfords in the 1400’s. The 4th Earl of Crawford, Earl Beardie, plays a role in another ghost story.

The Lindsay’s fortunes reached their height in the 1400’s. There were junior houses in Dumfries, Lanarkshire, Lothian, Fife, Perth, Inverness and Aberdeen. The two main lines of the Lindsays of Crawford and the Lindsays of Byers had become one of the great family interests of the north, owning much of Angus and dominating the county politically and militarily. From this position of power (and with their strong Stewart blood), the Lindsays were able to take a leading part in the great and dangerous game of making (and unmaking) kings. The main figures in this contest were the 4th and 5th Earls of Crawford; David, the 5th Earl, later the Duke of Montrose, the favorite of James III.

The Tiger Earl, or Earl Beardie as he was alternatively known both for his ferocious disposition and for his flame-red hair, made himself a virtual tyrant in Angus. He conspired with the great Lords of the South and West to subvert the crown and thwart its plans to force submission by the feudal Barons. MacDonald, however, lost his nerve and Douglas lost his head when he was treacherously slain by King James II himself in Stirling Castle.

Crawford was left, therefore, with a stark alternative: Take on the crown alone, or make a humiliating submission. The latter seemed just as dangerous as the former, since the King had sworn that he would raze Crawford’s great castle of Finhaven to the ground, “making its highest stone, its lowest.” Nevertheless, when Earl Beardie did agree to throw himself on King James’ mercy, his repentance was so abject that James had no alternative but to forgive him. Yet he had sworn an oath against Crawford! How could he avoid breaking it? An ingenious courtier suggested the answer. Earl Beardie invited the King to Finhaven, where he entertained him in regal style. And then early one morning, King James went up onto the roof of the castle and ceremonially threw its highest stone down into the courtyard, thus fulfilling his oath.

Despite this reconciliation, however, the local folks continued to think of the Earl Beardie as a great rebel. The Earl earned a reputation not only for cruelty, but also for resorting to the Black Arts to further his political purposed. His cruelty is related in the story of a messenger who once cut a cudgel from a chestnut tree growing on the Finhaven Castle grounds. Earl Beardie hanged him for the offense from one of the chestnut tree boughs.

The ghost of this luckless messenger still walks between Finhaven and Cariston and another rhyme tells us that:

Earl Beardie ne’er will dee,
Nor puir Jock Barefoot be set free,
As lang’s there grows a chestnut tree. 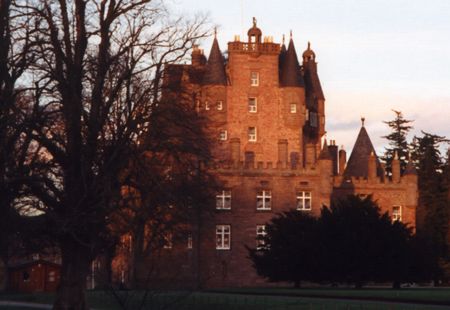 Dating from the 1400’s, this is one of the most haunted castles in Scotland.
Glamis may be best known as the setting for Shakespeare’s MacBeth,
but it is also the home of a Lindsay ghost.
Photo by Jill Terrill

Glamis is reported to be one of the most haunted castles in Scotland. One of the ghostly legends of the castle is Alexander Lindsay, 4th Earl of Crawford, also known as Earl Beardie. The Earl was an inveterate gambler. One Sabbath, he was playing cards with the first Lord Glamis at Glamis Castle and was losing quite heavily. When Lord Glamis advised him to stop playing, Earl Beardie, in a great rage, swore outrageously that he would continue playing until Judgment Day. This, evidently, was the proverbial “last straw” for, as the Earl spoke, a clap of thunder and a flash of lightning brought into the room the Devil himself. The room and all its occupants then disappeared from mortal sight.

Many believe that unexplained sounds in the castle can indeed be explained: The Earl Beardie and Lord Glamis still inhabit a secret room at Glamis Castle, where they are condemned to pay for their rebellion against the Lord by playing cards all thorough eternity—with the Devil himself as the dealer! 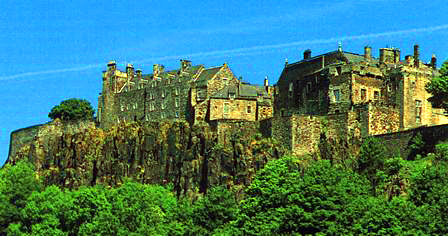 After visiting Stirling Castle, you will certainly come away with a glimpse into what life was like at a castle during medieval times. This castle is one of the finest restoration projects in all of Scotland.

Stirling Cast as a Strategic Possession

Stirling Castle occupies probably the most strategic and therefore the most powerful, position in Scotland. Because it links North and South, Highlands and Lowlands, many have called it the “Key to Scotland” and asserted “whoever holds Stirling and its bridges splits Scotland in two.” At various times in its long history, Stirling Castle has changed owners more than any other castle in Scotland. It has been a refuge for kings, a prison for political prisoners, a storehouse for weapons and a museum. Although records indicate that a castle occupied the Stirling site before the 11th century, the Lindsay-Stirling connections occurred several centuries later.

1452—An indirect connection occurred in the middle of the 15th century. King James II, believing that William the Eighth Earl of Douglas was plotting against him, invited the noble to Stirling and provided a letter of safe-conduct. After a dinner with Lord Douglas, King James invited him to explain the “League of Douglas,” into which Lord Douglas had entered with the Earl of Crawford. When William refused to disband the League, King James, who greatly feared this most powerful alliance, seized his dagger and stabbed Lord Douglas. His courtiers then killed Lord Douglas and threw the body from a window. When King James later was declared guiltless by Parliament, the Ninth Earl of Douglas (brother of the Eighth Earl) attacked both city and castle.

1567—Shortly after Queen Mary’s abdication, her thirteen-month-old son was crowned King James VI at Stirling. King James and country were ruled by the Earl of Mar, who was named Regent.

1572—Mar died and the Earl of Morton succeeded him. Morton made many powerful enemies during his Regency and other nobles bitterly resented his power over King James.

1578—The Earl of Atholl and Argyll collected any army to march to Stirling and “free” the King. The King ordered them to disband, however and a subsequent reconciliation feast at Stirling was meant to show that the grievance was ended.

1579—Esme Stewart became a courtier in King James’ company at Stirling and steadily gained power and influence over the young monarch. King James made him not only a confidante, but also Earl of Lennox.

1582—Morton having been betrayed by Lennox and another of King James’s favorites, James Stewart was condemned to death for his part in Darnley’s murder.

1585—An alliance of rebellious lords attacked the castle, bringing an end to James Stewart’s influence over King James. The King, the Earl of Montrose and the Earl of Crawford shut themselves in Stirling Castle and remained there until receipt of a guarantee that no harm would come to them if they surrendered. Upon their subsequent surrender, King James restored the castle to the Earl of Mar.

Stirling Castle underwent extensive renovation during the 1990’s. The Royal Chapel, the site where Mary Queen of Scots’ son was crowned King James VI, was renovated to its medieval splendor. In addition, the Great Hall was restored. The entire building was restored to its original state, including the outside walls being painted with a limestone wash. Stirling Caste is a not-to-be-missed stop for anyone traveling to Scotland.