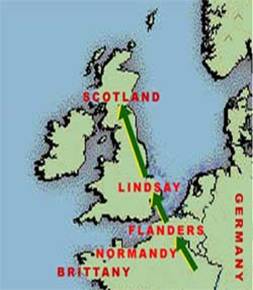 There is little doubt that ancestors of the Lindsays of Scotland arrived from England. Beyond that various writers have hypothesised their origins as Norman or German, but the latest research strongly suggests Flemish ancestry.

Duke William’s army at the Battle of Hastings in 1066 was supported by a strong Flemish contingent, among them Gilbert de Ghent. As a reward for his support, Gilbert was created Earl of Lincoln and awarded much land in the ancient Anglo-Saxon kingdom of Lindsey, in Lincolnshire. Lindissie means Lincoln’s Island and was a jurisdiction within that English shire. Gilbert’s son Sir Walter de Lindissie, “noble and knight”, accompanied David, Earl of Huntingdon and brother of Alexander I, to Scotland to claim his throne.

A charter records that Sir Walter sat as a member of Prince David’s council in the Scottish border area of Cumbria along with other knights in the early part of the 12th century.

When Prince David became King of the Scots, he placed these knights as great barons in the power structure. Sir Walter’s great-grandson, Sir William de Lindesay, sat in the Parliament of 1164 and was afterwards a justiciar. He held the lands of Crawford, the earldom of which was to ultimately be the premier title of the chiefs, but he sat in Parliament as Baron of Luffness in East Lothian.

Sir William’s son, David (1), married Marjory, a member of the Scottish royal family and on David’s death in 1214 he was succeeded as third Lord Crawford by his son, Sir David (2), who also inherited the English estates of Limesy and Wolveray. Another of Sir William’s sons, William, was steward to the Steward of Scotland. So it was probably he who adopted the familiar chequered fess of the Lindsays as ‘Arms of Feudal Dependence’ since they mimic the Stewart coat of arms so closely. His son, Sir David (3), acquired the lands of Byres and his son, yet another Sir David (4), was High Chamberlain of Scotland in 1256 and later joined King Louis IX of France on a crusade; he was killed in Egypt in 1268. 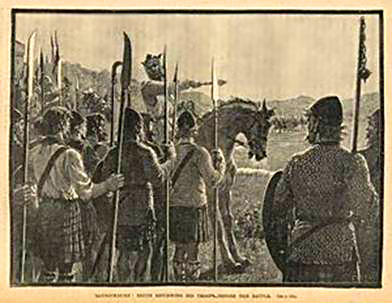 Image courtesy of The New World Encyclopaedia Robert the Bruce instructing his soldiers at the Battle of Bannockburn.

The crusader’s successor, Sir Alexander Lindsay, fought with King Edward I of England at the battle of Falkirk, but thereafter returned to Scotland to support the Scottish cause. He supported Robert the Bruce in the battle of Bannockburn in 1314, so lost his English properties and saw the imprisonment of his sons. The eldest of his sons, Sir David (5), was later among the signatories of the ‘Declaration of Arbroath’, the 1320 assertion of Scottish independence. Five years later he married Mary, daughter of Lord Alexander Abernethy of that Ilk and it is from this marriage that his descendants quarter the Lindsay arms with those of Abernethy.

Sir David Lindsay (6), grandson of the Arbroath signatory, took part in a famous joust on London Bridge in 1390 in front of King Richard II of England. 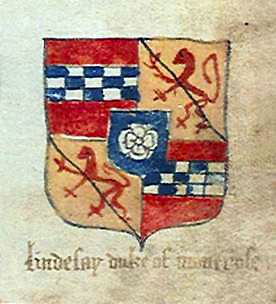 He won so easily that there was a suggestion that he was tied to the saddle – until he jumped off his horse. On the 21st of April 1398 Sir David was proclaimed Earl of Crawford by his brother-in-law, Robert III, in the Parliament held at Perth. At about this time he created a private officer-of-arms, Endure Pursuivant, an appointment which exists to this day over 600 years later. In 1403 Sir David was appointed Lord High Admiral of Scotland. Sir David shared his time between his castle at Finaven and his home in Dundee. At this time the Lindsays possessed more than twenty great baronies and lordships, besides other lands of minor importance.

The Lindsays have been involved in several significant battles over the years. Alexander Lindsay wished to claim the position of “Balie of the Regality” (akin to a magistrate) in Arbroath, a function usually appointed to someone within his mother’s side of the family, the Ogilvys. The result was the Battle of Arbroath, fought in front of the Abbey and through the streets of the town. Alexander’s father, Sir David (7), rode between the two forces in an attempt to call a truce. However, an ill-advised Ogilvy, thinking that this was the start of the Lindsay attack, threw his spear at the Earl. Over 600 were killed in the battle including Sir David. On his untimely death, Alexander became 4th Earl of Crawford.

During the 15th century the Lindsays lost much of their land due to feuding with the Ogilvy family. Alexander Lindsay, the 4th Earl of Crawford, also known as the Tiger Earl or Earl Beardie due to his long black beard, was badly defeated by an Ogilvy and Gordon alliance under the Earl of Huntly, at Brechin in 1452. His son, David (8), was created Duke of Montrose by James III in 1488, but this title was forfeited on the death of the king in the Battle of Sauchieburn in June that year. The title was then returned a year later, but only for the period of the holder’s lifetime. So it was not inherited by his son, John, the 6th Earl of Crawford, who fell in the Battle of Flodden along with the Earls of Argyll, Atholl, Bothwell, Caithness, Cassillis, Erroll, Glencairn, Lennox, Montrose, Morton and Rothes and their king, James IV. 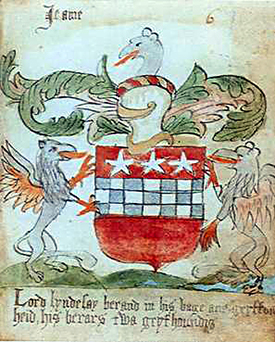 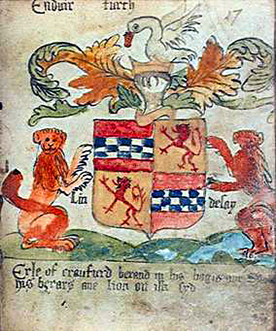 Patrick Lindsay of the Byres also fought at Flodden but was one of the few nobles to survive, only losing an arm in the battle. He was one of the four peers appointed by Parliament in December 1513 to advise the widowed Queen Margaret. His grandson John, 5th Lord Lindsay of the Byres, was present at the death of James V and was one of the nobles to whose charge the infant Mary, Queen of Scots was committed in 1542. He was in command of the Scots forces at the severe defeat of the English at Ancrum Muir, on 6 March 1545. His son Patrick, the 6th Lord, took part in the murder of David Rizzio and challenged Mary’s lover, Bothwell, to mortal combat at Carberry Hill and at Lochleven Castle forced the Queen to then give up her crown. The Lindsays later supported Mary, Queen of Scots and fought for her at the Battle of Langside in 1568.

The battle did not go in the Queen’s favor and she fled to England where she was imprisoned intermittently for 17 years before being executed. It was from this line that the 10th Lord Lindsay was made 1st Earl of Lindsay by King Charles in the 17th century.

Through the centuries, the Lindsays have been eminent in many fields of endeavor. David Lyndsay, Lord Lyon, King at Arms, was also a playwright and poet of the Reformation. His fame is rivaled by that of Robert Lindsay of Pitscottie, whose History of Scotland is one of the most valuable Scottish national documents. The Rev. David Lindsay, minister of Leith, became Bishop of Ross in 1600. Patrick Lindsay was Archbishop of Glasgow. David Lindsay, Bishop of Edinburgh, crowned Charles I at the coronation at Holyrood in 1633. 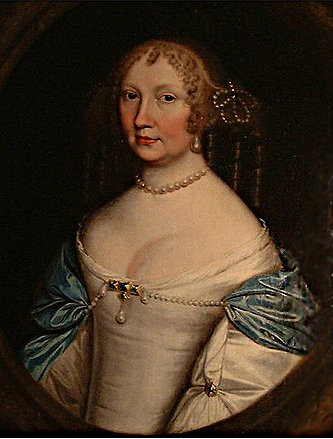 Lady Anne Lindsay, daughter of the 5th Earl of Balcarres

Lady Anne Lindsay, daughter of the 5th Earl of Balcarres, wrote “Auld Robin Gray”, one of the finest Scottish ballads. 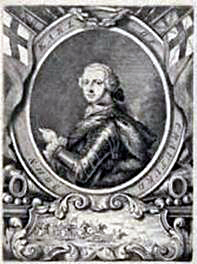 The 20th Earl of Crawford, Image courtesy of www.wikipedia.com

In the 17th century the Lindsays were Royalist supporters of King Charles Stuart. Ludovic Lindsay fought for King Charles I and later joined the Marquis of Montrose in Scotland. He died in prison and the title of Earl of Crawford passed to another branch that had been created Earls of Balcarres in 1651 for services during the Civil War. The first Earl of Balcarres became hereditary keeper of Edinburgh Castle and then Secretary of State for Scotland. His son supported the Jacobite Uprising and fought at the Battle of Sherrifmuir in 1715, but the Lindsays did not take part in the later Jacobite Uprising of 1745. The 20th Earl of Crawford raised the Black Watch regiment in 1739, which was originally called the Lindsay-Crawford Regiment. Today, they still stand guard over Edinburgh Castle. Robert Lindsay, cousin to the 26th Earl, was the first recipient of the Victoria Cross. 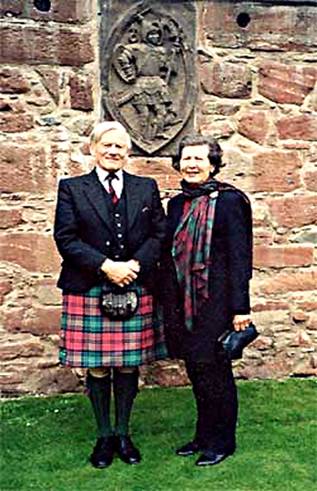 Lord and Lady Crawford in the Pleasance at Edzell Castle on the occasion of the celebration of the 600th anniversary of the Earldom of Crawford. (Photo by Marty Thurmond, 1998).

Additions and modifications were made to the original document
approved by Rt. Hon Robert Alexander Lindsay, the 29th Earl of Crawford.

Written in part by:

Also written in part by: