In heraldry, a blazon is a formal description of a coat of arms, from which the reader can reconstruct the appropriate image. The visual depiction of a coat of arms traditionally has considerable latitude in design, while a blazon specifies the essentially distinctive elements; thus it can be said that a coat of arms is defined not by a picture but rather by the wording of its blazon.

Blazon also refers to the specialized language in which a blazon is written, and, as a verb, to the act of writing such a description.

Below is a written description or blazon of the Lindsay Coat of Arms.

The Heraldic Achievement of Robert Lindsay, Earl of Crawford and Balcarres, Chief of Clan Lindsay

These quartered arms date back to the marriage of the 10th Lord Lindsay and feudal Lord of Crawford, Sir David Lindsay of Crawford, to Mary, the daughter of Lord Alexander Abernethy of that Ilk, in 1325.

A heraldic description or blazon of the arms reads:
Quarterly, 1st and 4th Gules, a Fess chequy Argent and Azure (for LINDSAY); 2nd and 3rd Or, a Lion rampant Gules, armed and langued Azure, debruised of a Ribbon in Bend Sable (for ABERNETHY).

Crest: A Swans neck and wings Proper issuant from a Crest Coronet Or.

Supporters: Two Lions rampant guardant Gules, armed and langued Azure. The arms in the first and fourth quarters depict a silver and blue check pattern on a red background and in the second and third quarters a red rampant lion with blue tongue and claws on a gold field. Over each lion is a thin black stripe. Supporting the shield on a compartment are two red lions with blue tongues and claws. The crest features a white swan within a gold crest coronet, above a helm and coronet of suitable rank. Please NOTE: There are two version of the crest and the coat of arms; one with a demure swan for the people of the clan and one with a confident and authoritative looking swan for the chief.

The Earl of Crawford Coat of Arms

Titles Held by Our Chief 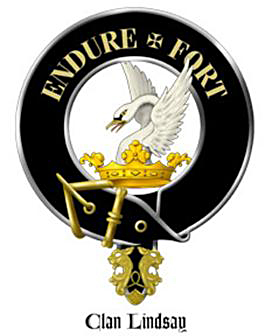 A clans crest-badge signifies their allegiance to a specific clan Chief. Those who fought for the Chief wore a belt or strap around their arm with the badge to signify the clan and Chief to whom they are loyal.

The Clan Lindsay crest-badge displays the head and wings of a white swan within a crest coronet. Etched on the strap is our clan motto, Endure Fort which is Latin for ‘Endure with Strength’. The most familiar crest for Crawford is shown. The Latin motto on the crest-badge reads: Tutum Te Rebore Reddam which translates to ‘Our strength in exchange for your trust’. Have you ever looked closely at the Coat of Arms of our Clan
Chief? In the second and third quarters of his shield there are rampant lions and they have blue tongues and blue claws!

First of all, how do they come to be on Lord Crawford’s Arms? This is a long story back to Malcolm Ill, King of Scots who was married to Margaret, known as Saint Margaret in 1069. The Royal Coat of Arms has a rampant lion surrounded by the double tressure.

One of Malcolm’s sons formed the line of the Earls of Fife and they displayed the rampant lion on their Coat of Arms but dropped the royal double tressure.

All the Earls of Crawford up to the present day have used this Coat of Arms respecting the blood line back to King Malcolm Ill and St Margaret.

So, we know where the lions came from but what of the blue tongues and claws? This is one of the ancient rules of heraldry and is clearly displayed in the “Armorial of Sir David Lyndsay of the Mount”, circa. 1542, from which these images have been copied. As a general rule, beasts of prey will show their claws and tongues in a different colour from the colour of their bodies. Red beasts usually display blue tongues and claws, as can be seen on the current Royal Banner of Scotland, the Scottish Lion Rampant flag.